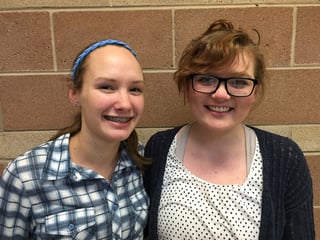 It is a well-known fact that a high school athlete selected as first team all-state is a big deal.  These achievements are noted through a player’s college career and even into an individual’s adult years.  What is less well known, is that sports are not the only areas in which students may be designated as “all-state.” Musicians throughout the country compete each year to be selected as part of all-state choirs, all-state bands, all-state orchestras, and more.  For the first time ever at the Parker campus, Lutheran High had students audition for these prestigious ensembles, and two of those individuals, Bethany Schilling and Beth Vanderhyde, were honored with a selection to the all-state women’s choir.

The audition process was quite rigorous and required months of preparation.  The individuals that auditioned are members of LuHi's Jubilate Choir and started preparing already back in May for an October audition.  The audition consisted of singing scales, intervals, triads, identifying intervals, sight reading, sight singing, and a prepared solo.  The auditions were then scored, and the top 600 singers from the nearly 2000 students that applied were selected to be a part of the All-State Mixed Choir, Women’s Choir, or Men’s Choir.

It is recognized by choral directors around the country that Colorado has one of the most rigorous audition processes throughout the fifty states.  While some states just require a videotaped prepared solo, Colorado recognizes that a more intense audition process ultimately benefits both vocalists and directors.  “I have noticed a much higher degree of musicality and ability from the students that auditioned,” noted LuHi choral director Chris Loesel.  “While it was a challenging and sometime frustrating process to go through, now looking back, I wouldn’t change anything about the standards.  Students are learning and growing and that is what is most important.”

One of the unique features of the all-state music experience is that the individuals actually get the opportunity to perform together for an audience of thousands in an all-state music concert.  Bethany Schilling and Beth Vanderhyde are busy preparing their music to sing as a part of the choir.  The choirs are led by world renowned choral directors, and the students get the opportunity to rehearse for three days leading up to the concert with their conductor.  Students from around the state will converge on Denver during the first weekend in February to prepare and perform.  The All-State Women’s Choir, of which Beth and Bethany are a part, will be led by Dr. Carolyn Cruse, head of choral activities at Texas Tech University; and the repertoire consists of four to eight-part women’s choir music.  The expectations are high, but this is a once in a lifetime opportunity for all involved.

Even though the stress of the first audition is behind the singers, there is still one more checkpoint before they are allowed to participate.  The students are required to do a second audition the weekend of the performance to show that they have not only learned the music for the concert but that they have memorized it as well.  The second audition ramps up the expectations as well as solidifies the honor attributed to being a part of such a high-achieving group.

While the audition process and repertoire learned for the experience have certainly been a challenge, Beth and Bethany and thrilled to be a part of the experience.  If you are interested in attending, the All State Choir concert will be held on Saturday, February 6th at the Bellco Theater in Denver at 4:00 PM.  Tickets can be purchased at http://www.axs.com/events/302709/colorado-high-school-all-state-choir-tickets?skin=ccc