For over six decades LuHi Theatre has been committed to performing high quality, professional theatre for the whole family to enjoy. Our production staff is dedicated to giving our students the best educational and performance experience possible and most importantly to keep Jesus Christ at the center of all we do.

LuHi Theatre productions are performed in the state-of-the-art Pace Center theatre complex located in downtown Parker, giving our students the unique opportunity to work in a professional theatre, alongside theatre professionals. The educational value of working with these seasoned professionals is unparalleled and we very excited about this partnership.

In LuHi’s deep, rich history we have performed a wide variety of shows. Everything from comedic to dramatic, classical to contemporary and even audience interactive shows gives our students a well-rounded theatre experience. Many of our students also attend theatre conferences and compete in various competitions. This gives our students another opportunity to learn from industry professionals and gain valuable feedback on their performances. 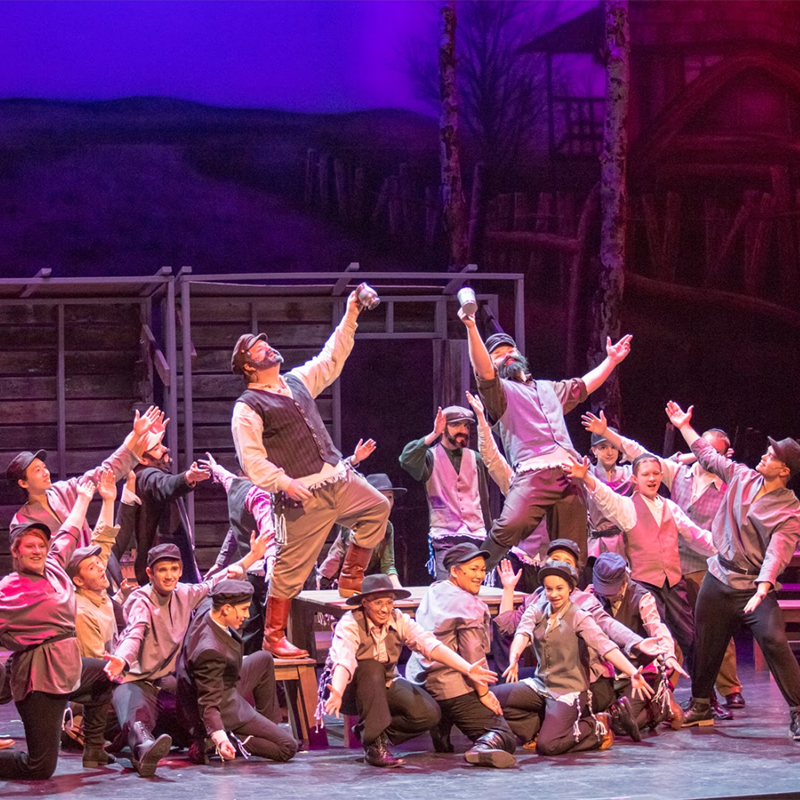 My four years at LuHi have been life-changing. My favorite part of my high school experience was being a part of theatre. I made so many amazing friends and formed a deep connection with the faculty, all while learning more about acting and technical theatre. Being involved in LuHi theatre has helped me grow as an actress, but more importantly, as an outgoing, creative child of God. – Bri Angle, Class of 2019 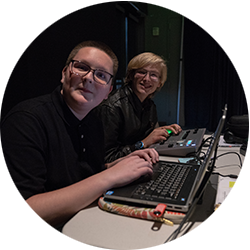 The LuHi Musical is our fastest growing theatre production with 60+ LuHi students actively involved each year.

Unique opportunities abound with this production. Our acting students work with seasoned directors and choreographers to create dynamic characters, dances and vocals on the stage. Our technical students work alongside the Pace Center staff and parent volunteers enhancing their knowledge of set construction, costume & makeup design and all aspects of how a show comes together. Band students work alongside professional instrumentalists and parent volunteers in our live orchestra.

We believe in learning from the best. These valuable educational opportunities are not limited to LuHi students however, every few years we invite local grade school students to be a part of our musical. This provides a great community outreach and gives our high school students the opportunity to teach what they’ve learned and mentor the next generation of theatre students.

This show is performed on the mainstage theatre at the Pace Center theatre complex.

In addition to the winter musical, LuHi performs three additional plays during the school year, giving our students plenty of opportunities to excel at their craft. Our annual Theatre Showcase is done dessert theatre style and usually employs a light hearted comedy, an interactive murder mystery or student directed One Act plays. Our audience is treated to appetizers, desserts and drinks while engaging directly with the actors and occasionally may be participants in the show! This is a great introductory play for any new students interested in trying out theatre. This show is performed in the Event Room at the Pace Center theatre complex.

Our second fall production and our spring production usually employs a more powerful or technically strong show. These productions give our students the opportunity to really hone their skills and stretch their abilities with deep-seeded dramas, complex comedies, ancient Greek tragedies, or classical Shakespeare. These shows are performed at the Schoolhouse Theatre, part of the Pace Center theatre complex. 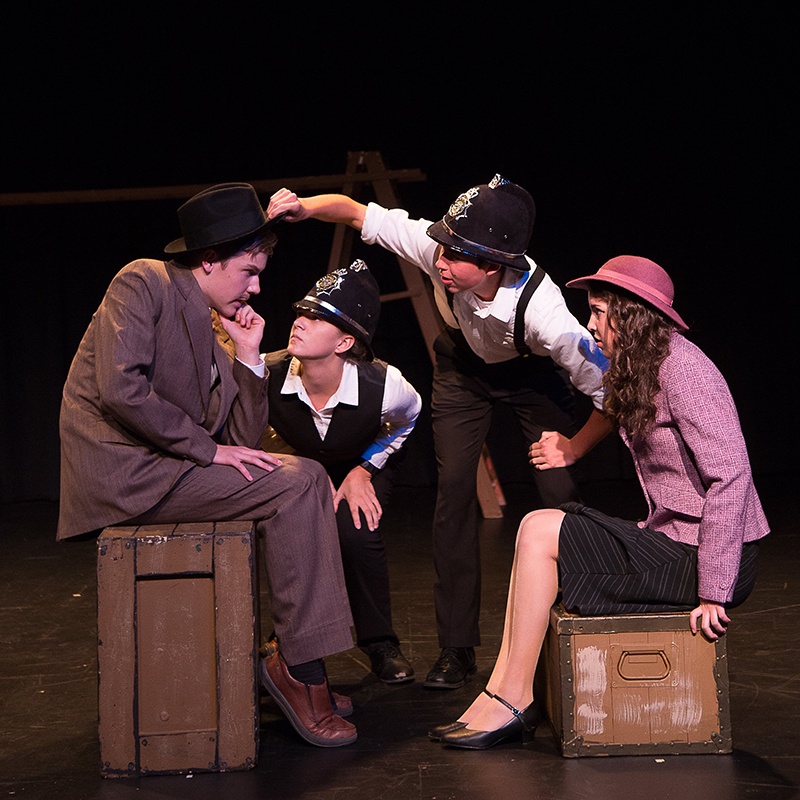 Lutheran High School has the privilege of performing our productions at the state-of-the-art Pace Center allowing our students to get real world theatre experience alongside professionals. The Pace Center boasts a 500 seat Mainstage theatre, a 200 seat blackbox theatre (The Schoolhouse) and a very versatile Event Room.

Crossplay is a ministry theatre troupe which performs Christ-centered skits, songs and videos for chapels at LHS as well as at our Association grade schools. Crossplay also performs for various church and community groups throughout the year. They are directed by Jillian Lietzau and Denise Noffze. Crossplay's mission is to spread God’s Word and minister to the community through theatre and song. They are led by these verses: “Go into all the world and proclaim the Gospel to the whole creation” – Mark 16:15 and “Whatever you do, do it all for the glory of God.” – 1 Corinthians 10:13

LuHi is a proud member of the International Thespian Society (ITS). ITS is the world’s largest honor society for theatre students. The LuHi theatre department attends the regional ITS conference/Thescon every December in downtown Denver. This opportunity allows students to participate in a variety of workshops taught by theatre professionals and college professors (acting, dance, make-up costume design, playwriting, lighting, etc), visit with college reps, audition for scholarships and see performances by other area high schools.

The Bobby G Awards recognize outstanding achievements in high school musical theatre in Colorado. Schools apply to have their musicals adjudicated by area professionals for the opportunity for students to be nominated for and win awards in various production elements like best actor/actress, costume/makeup/set design, best overall production, etc. The best actor & actress winner move on to compete at the national Jimmy Awards in New York. LuHi’s musical is a part of this program every year.

Learn more about LuHi Theatre and see videos of our past performances on our Facebook page! Joining LuHi Theatre was one of the best decisions I ever made in my high school experience. Ms. Lietzau and Mr. Loesel taught me to push myself and not be afraid to try new things.  I learned how to express myself and take on challenging roles. My favorite part about LuHi Theatre is Jesus is the center of it all. Praying together and sharing devotions before shows really brought everyone in the program together.

I never expected to fall in love with theatre so much, but God put it in my life for a very special reason and I am forever grateful. I appreciate theatre and music so much more now thanks to LuHi. I feel like I found my home in performing arts and am so thankful and excited that I’m able to keep on pursuing it in college. – Mary Dyson, Class of 2018

Head of the Theatre Department, Director
After graduating from LHS (Denver campus), Jillian continued on to Adams State College where she received a B.A. in Theatre. Since then she has stage managed and acted in a number of shows for community theatre including Harvey, Destry Rides Again, The Thorn and the DLHS alumni show The Complete Works of William Shakespeare (Abridged). Earlier in her career, Jillian co-owned a theatre company where she produced & directed The Odd Couple and Lend Me a Tenor.
For the last eighteen years Jillian has worked with the LHS theatre department. She has directed, built sets and produced fight choreography for such shows as The King & I, Treasure Island, Romeo & Juliet, Godspell, The 39 Steps, The Wizard of Oz, Fahrenheit 451 and Fiddler on the Roof, just to name a few.

Jillian has taken theatrical stage combat classes from the Denver Center Theatre Academy. She is proficient in rapier & dagger, broadsword, unarmed, sword & shield, knife, quarterstaff, single sword, knife and the sport of foil fencing. Jillian is a member of the Society of American Fight Directors.

Director
Troy is a 1990 graduate of Concordia University, Seward, Nebraska with a BS in English and Speech/Drama. He has worked for the Colorado Lutheran High School Association since 1999. He teaches Theology II and English courses, as well as coaching football. Troy was involved in theatre in high school, with work behind and on the stage. In college he continued his interest in theatre, directing One-Acts and performing on stage. Troy has directed such shows as The Curious Savage, The Man Who Came to Dinner, Almost Maine, Helium and Antigone Now. He also had the privilege to perform with the students in Guys and Dolls.

This is Megan's fourth year at Lutheran High School after teaching in Roseville, Minnesota for fourteen years. During her years in Minnesota, she served as choreographer and assistant director. Some of her favorite shows to choreograph include Beauty and the Beast and Seussical.

She is thankful the Lord gave her a love for theatre and dance along with another opportunity to help students have the unique experience that only theatre can provide. Megan cannot imagine January through March without the rehearsals and camaraderie that come with musical season. In addition to theatre, Megan enjoys travel, hiking, time with family, and watching her Nebraska Cornhuskers.