This past summer, the LuHi Art Academy spent weeks working on a new mural as part of the Paint Parker Mural Program. This is the third mural LuHi students have done in collaboration with the town to beautify our community. Mr. Hollenbeck, a group of thirteen students, plus a handful of parents and LuHi alumni, worked for weeks brainstorming, planning, and painting the Cave of Won-Doors mural found at Kieffer's Crossing Tunnel at the intersection of Parker Road and Mainstreet. 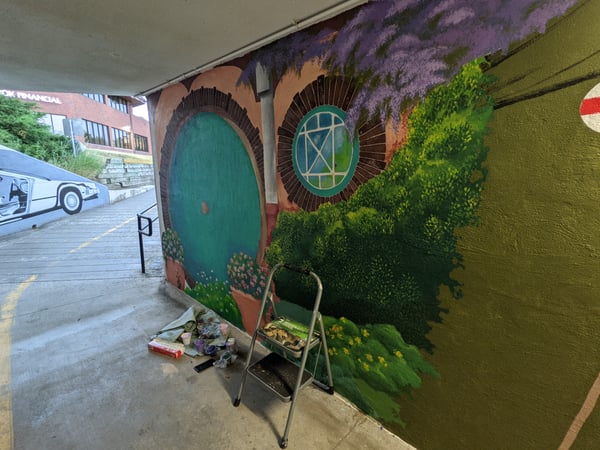 Mr. Hollenbeck, Director of the Art Academy at LuHi, shared how the idea for the Cave of Won-Doors came to be, "Last year's Art Academy and I discussed possible ideas for a mural in a long tunnel. We talked about what you might find in a tunnel, and one idea was a door. We started thinking of iconic doors and realized there are a lot of doors that we could come up with from pop culture. We started to get excited about painting doors from Harry Potter, Lord of the Rings, and sitcoms. We realized that it would be fun for people walking through the tunnel to see how many they could recognize. So we brainstormed possible doors and came up with around 50 ideas. 34 eventually made the cut."

Mr. Hollenbeck explains that narrowing down the doors was quite a process between him, the students, and the town of Parker, who approved the final design. Even as painting began, some ideas shifted. As students continued to have great ideas for new doors, they replaced the less popular door designs. Students chose the doors they wanted to work on and went for it in their artistic style with an impressive amount of ownership.

"I really love them all. The doors all show the personality of the artist who painted them!" says Mr. Hollenbeck

LuHi junior, Lauren DeHeve, was one of the students who helped plan and painted the mural. She painted the Minecraft door. She shares, "My favorite part about painting it was seeing the finishing product. Painting the door was incredibly tedious and took a lot of time, so seeing it after finishing it was super rewarding. It was something that I brought to life."

Another LuHi junior, Ava Lucero, worked on the Twilight Zone door, the Kim Possible garage door, and Percy Jackson's Gate to Olympus. Ava talks a little about her experience, "The most challenging part of painting these murals was getting the doors up to scale, keeping them symmetrical, and keeping the paint from dripping onto everything. The garage door grooves proved to be incredibly tedious and took me forever, and the designs on the Percy Jackson door were very stressful to keep identical. Still, they were both worth it in the long run.

The best part of painting the doors was being able to see the final product and be like, "Hey! I painted that!". Truly, coming to the tunnel was also something I looked forwards to after work every day. It was nice to put my headphones in, talk with my friends who were also working on doors, and just let myself enjoy and be one with the art. Overall, it was such a blessing to have been able to work on the doors in the tunnel!" 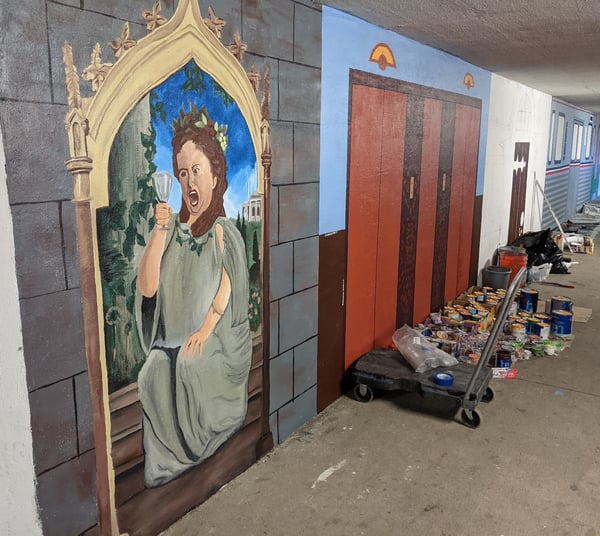 Kyra Crowe, LuHi sophomore, painted the Fat Lady door from Harry Potter and helped with the Alice in Wonderland door. One of the things she enjoyed the most about the project was getting to know new people. "I made quite a few friends!" she shares. "The best part about the mural was doing something to brighten up the tunnel and someone's day."

If you want to see the mural for yourself, park at O'Brian Park in downtown parker and follow the sidewalk towards Parker Road between the diamond and basketball courts! See if you can identify all 34 doors!

Be on the lookout for other Art Academy events throughout the year. LuHi is blessed to have an abundance of talented artists on campus. They are planning their third annual Portrait Artist of the Year contest. The Town of Parker has already contacted them to paint another mural. We can't wait to see what the Art Academy does next!